A word about first overwintering of variegated seedlings 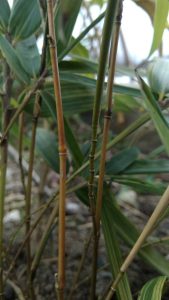 Winter is finally coming to an end. Days are getting longer, snow has almost melted and mild spring-like temperatures are on our way. This winter was quite cold with temperatures down to -16°C and strong north-eastern wind that emphasized the windchill index. Luckily, we’ve also had quite a large amount of snow during the cold weather. It was not hard to protect bamboos using snow this year, so I expect minimal damage on my larger bamboos, moderate damage on my Moso seedling and no damage on my Phyllostachys arcana seedlings.
I can only hope we don’t get hit by severe freeze in late spring like we did the last few years. It did not affect the bamboo much, so I’m more worried about other plants and fruits around the garden. 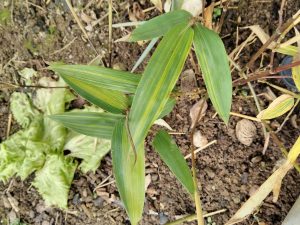 Interesting variegation on one of the culms

I’m keeping my variegated seedlings in a raised bed. To keep the bamboos protected, I covered the whole thing with a PVC tunnel. It did OK throughout the mild first part of winter, but as it got really cold, I’m not sure the seedlings would be able to survive without better protection. Lucky for us, the polar blast brought some snow, so I was able to pile it up around the raised bed. There was enough snow to cover the bed completely. Later, we’ve got quite a lot more snow and tunnel finally collapsed under thick snow cover. When the worst was over, I removed the snow and found the seedlings completely unharmed. They were in better shape than I hoped they would be. I hope to see a decent upsize this spring. Last year, there were hardly any new shoots, all of them seemed to be survival shoots. They managed to grow long rhizomes in all directions, though, so I expect them to upsize… eventually.