First half of winter

In the late January, winter slowly starts fading, nights become shorter and days a bit warmer. We’re half way through winter! Since, I’m  overwintering my variegated bamboo seedlings inside, they have no idea about our brutal winter outside. At this point, it seems, two of my Phyllostachys arcana ‘Luteosulcata’ seedlings will gain in size a lot. The first and previously the largest seedling remained alive and still refuses to grow. For now, at least, it’s the smallest of three variegated seedlings. It grew many shoots as soon as I brought them inside and all but a couple of them died off and rotted. It’s getting better, but it lags more and more against it’s younger siblings. 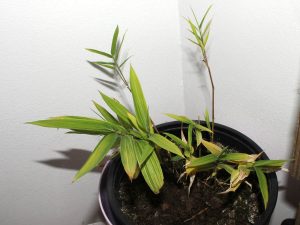 The oldest seedling, which grew quite well during last winter is not doing exceptionally well this winter. In the beginning, it was infested with aphids and it soon started losing even the youngest leaves. I decided to spray all three bamboo seedlings with insecticide to eliminate any possible pest I had brought inside. I also trimmed the seedling considerably, removing all the highly damaged branches, leaves and a couple of dead culms. At that point, it started shooting heavily, but ended up losing most of the new growth.

Eventually it started to look much better. It actually ended up being the only of three seedlings without the strange fungal infection. I have left old culms that were still alive and they soon started branching out. The leaves were miniature, but they showed nice variegation. On a couple of leaves, I could observe another type of variegation. Some leaves were not progressively turning from lime green to yellow-green gradient kind of variegation, instead, the variegation was present from the very beginning, (completely green) dark green stripes on yellow leaf. Like last winter, I have had difficult time preventing leaf tips from drying out. I’m still investigating what actually causes that issue as it sometimes appear on other seedlings as well. I’m almost sure it’s water or nutrient related. 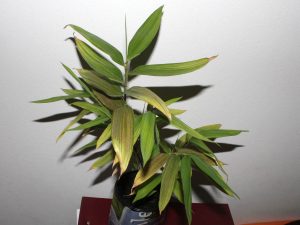 The weakest seedling that somehow recovered after being neglected for almost a year started strong from the very beginning. It merely had one shoot when I brought it inside, but it managed to push out one pretty large shoot. That single but large shoot used the energy from the previous stem, it died off when the shoot leafed out. The second seedling has shown incredible ability to survive and it actually grows much faster than the first seedling. To fight off the fungal infection I mentioned earlier, I regularly sprayed it with Aspirin dissolved in water. It looks like it’s working, the infection of the leaves slowed down considerably. Aspirin triggered another thing – growing branches and shooting. I’ve grown many bamboo seeds by now and I never used Aspirin. I have also never seen a bamboo seedling that would start branching out that much, or in the case of the third seedling – shooting insanely. 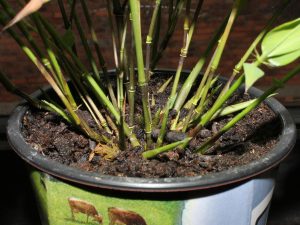 The least variegated seedling ‘exploded’ immediately after I brought it inside. It also got infected by the same fungal infection as the second seedling. Fungal disease did not slow it down as it remained vigorous and looked strangely healthy, if I count out the darkening leaves. It produces a lot of green matter, which makes it heavy feeder. It shows signs of nutrient deficiency soon after I stop giving it daily dose of water soluble liquid fertilizer. After treating with Aspirin, it went completely insane, pushing out more than 20 shoots at the same time. At the same time, older shoots branched out on nearly all of their internodes. I can’t tell for sure if it was the salicylic acid that did the magic, but it sure look so.

The infection doesn’t seem to be spreading now, and the seedling looks even healthier. The seedling showed three types (perhaps I could call them stages) of variegation. There are some completely unvariegated green leaves. There are loads of seemingly unvariegated leaves with a stripe on the edge of the leaf blade. Stripe sometimes have gaps of unvariegated leaf tissue which makes the stripes look a bit fuzzy. Some leaves have more pronounced stripes that appear in the middle of the leaf as well as on it’s edge. Lately, I am able to see leaves with same kind of progressive variegation as on the previous two seedlings. Strangely, it only appears on some of the shoots and they then have the same kind of variegation through the whole culm. Perhaps that could show chimeric nature of the seedling?

It’s much darker than other seedling’s variegation, it looks very similar and it also ‘grows’ progressively from more uniform lighter green color. Darker parts get darker while leaf matures and paler stripes get lighter green. These stripes are never (so far) yellow, compared to other seedlings, which makes the leaves look healthier.
I am not sure if these variegations will change with time, if one of them will become dominant or just fade out eventually.