Aphids roaming around the flower stalk

Drosera capensis is a carnivorous plant that can effectively fight fungus gnat flies, but can have a lot of problems, when infested with aphids. Aphids are usually moving over the parts of plant without traps, which makes them safe from Drosera’s sticky mucilage. Drosera can tolerate some aphids, but will start declining as the aphid population grows. At first, leaves can get stunted, wilted and show signs of damage. When there are too many aphids, D. capensis can no longer support sucking pest and all it’s leaves, which makes it start loosing leaves. First, old leaves dry out, then it spreads towards the newer parts of the plant. Eventually, if not treated with insecticide, the plant dies.

Each year when I bring my plants in for the winter, there are all kinds of insects I bring inside with my plants. As soon as I accommodate my plants, I see an ‘explosion’ of  fungus gnats population. It can easily be suppressed with careful watering and  an army of carnivorous plants. Then comes aphid outbreak. My carnivores can’t help much about that issue and are usually the source of aphids in the first place. Aphids are more resilient to insecticides, because they live in various life cycles. Aphid eggs often stay hidden and protected, hatching when the insecticide fades out.

Competing for food with carnivorous plant

Together with all the plant eating insects, overwintered plants often bring in less annoying creatures like small spiders, worms, centipedes or springtails.
This year, I’ve ‘imported’ several spiders in my large Drosera capensis container. Most of the time, they remain hidden among Drosera leaves. It’s interesting, how they can place their spiderweb around the sticky Drosera traps without being caught. They compete for food with Drosera capensis, but can’t really compete when it comes to efficiency. The thing I have noticed, however, is that the spiders seem to be hunting for aphids. I have been bottom watering for a while, and I noticed a bunch of aphid corpses under their web.

Aphid graveyard under the spider web

They bring all their prey to the same spot in the center of the spiderweb. When the spider eats them, tiny carcasses are dumped down onto the soil. Watering removes these piles of dead insects and it took bottom watering to observe them piling up.

I am overwintering a lot of Drosera capensis plants this winter and I have almost lost a few because of aphids. Strangely, the large pot remained quite healthy, despite the fact that there were aphids on them, as well as in all the other pots. Seems to me, that the spiders are doing quite a nice job, keeping aphid population in check. I hope that these little spiders spawn at least a couple (hundred) more. I intend to leave them on my carnivores and probably introduce them to my other plants as well. The nicest thing about them is – they stay at the same spot as long as they have food. None of them left their pot. 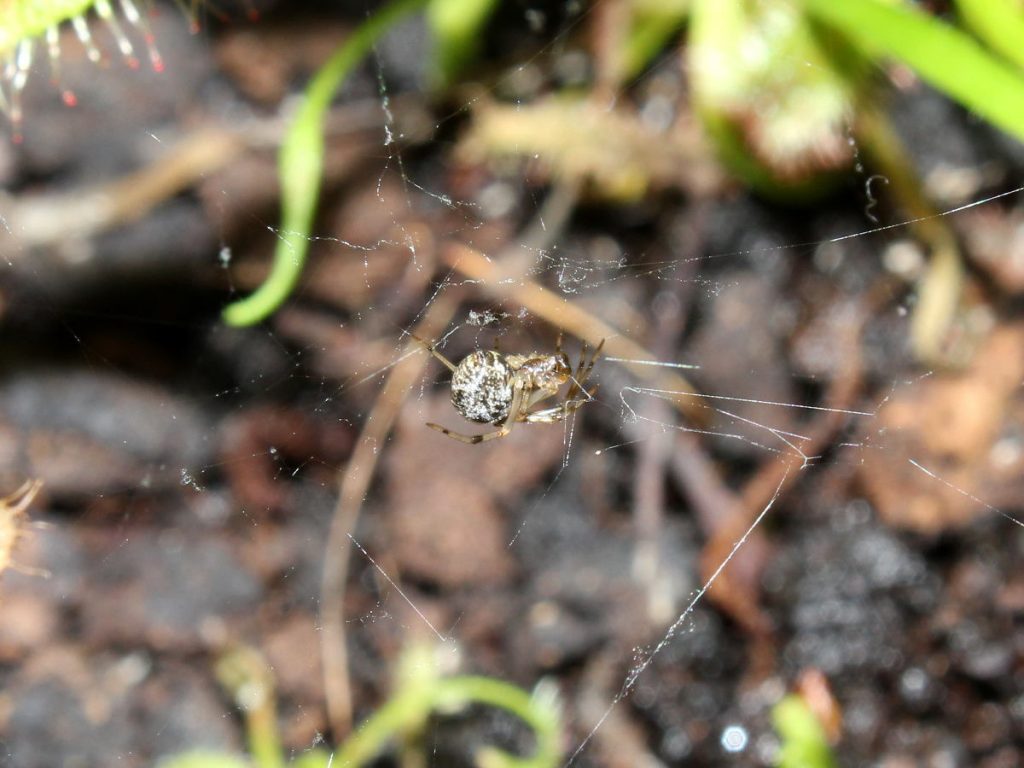