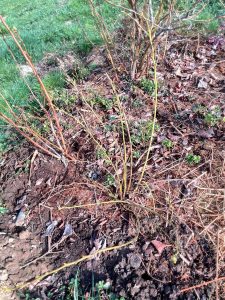 Two years ago, I have started growing blueberries from seeds. I have collected some of the seeds from large healthy fruits on my old blueberry plants. After stratification, seeds germinated very well and I ended up with many tiny slow growing blueberry seedlings. I have waited two years, before planting them into their final location and I have kept them in a rather small container in peat without any additional fertilizer. They could be a lot happier if i’d give them some food earlier, but they managed to grow anyway. When I planted them into mound of peat outside last year, they immediately started growing large shoots (compared to existing growth). In autumn, it became evident, that most of the seedling set up their first flower buds. Some failed to survive the weight of snow during the winter. 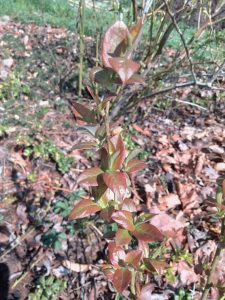 Seedlings at the beginning of their third growing season.

In early spring, the buds started swelling and I noticed they will start even more vigorous than last year. All the 1 year old shoots started leafing out early with nice red colored young leaves. All the shoots were extremely healthy and small seedlings soon began to look like nice little bushes. Some of the shoots have already started flowering. Flowers and leaves seem to be similar to their parent plants, but there is one plant with slightly different flowers. One of the seedlings have flowers which have much smaller opening of the flower. Despite being tighter and possibly harder for the pollinators to pollinate the flowers, there did not seem to be any issues regarding pollination.

I didn’t expect them to start flowering so early, as they are not taller than 30 cm with shoots just a few mm thick. At first, when flower buds opened, flowers appeared to be small and perhaps even a bit distorted with stigma pointing out of developing petals. Later, flowers developed normally and the seedlings started flowering at the same time as their parents. It will be interesting to see their fruits when they ripen. Plant appearance is roughly identical to their parents so I’d guess the fruits will be the same  as well.

Flowers are identical to those of their parents 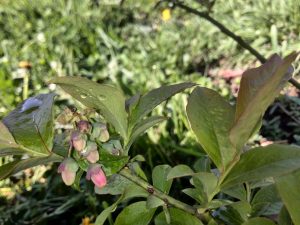