As many of you already know, I love to grow plants from seeds. Almost every winter, I’m bothering with a new plant, that needs to be kept alive inside under artificial lighting. Until earlier this year, I’ve had a setup with a combination of warm and cool white LED diodes. I’ve had relatively good results and didn’t even think about buying a grow light. One day, however, I’ve noticed a superb deal on a Chinese online shop, which made me think about building more power efficient and effective light setup. I did not think twice. I have bought several power adapters and full spectrum LED diodes with wavelength of 380-840nm. The LED diodes operate at 30-36V, which means I had to get a power supply, capable of supplying two 50W diodes with electrical power. All the commercial products were extremely expensive and possibly low quality, which means there would (could) be a lot of overheating and a chance of loosing my LEDs. I decided to use my old computer’s power supply unit, which can supply 5V and 12V. LEDs operate at 30V, so i needed to take care of power conversion.
I discovered some cheap converters online, and when I received everything, it was time to start building the LED grow light.

My expectations for the first grow light setup were not high. I wanted to see if I could make it work, check its effect on the plants and learn before building a larger, more sophisticated setup some day later. I decided to use simple wooden fixture to place the lights above the surface and attach the CPU coolers with LED chip to the wooden frame. When I needed to increase the height, the only thing I needed was a bit more wood and it took less than 20 minutes to increase the distance between plants and the lights.

I used computer parts, which made assembly quite easy

Computer PSU is capable of supplying energy to at least 5 LED chips operating at full power, so there’s always an option to upgrade the whole thing. Using old computer parts made it super-easy to assemble the whole setup and within an hour or two, I’ve had it prepared for the first test. When I plugged the power supply and turned it on, I needed to set the power converters to appropriate output voltage. When I increased the voltage over some point, the LEDs started to emit dim light. Success! With increasing voltage, the lights emitted more and more light, which became too bright to look at, even below the upper operating limit of 36V. I’ve set the power output to just a bit over 30V, which is the low operating value. Lower voltage means LED diodes use less power and don’t overheat as much as they would if I’d run them at full power. The ability to further increase the voltage offers an option to increase the height of the light – and greatly increase the amount of space for the plants below.

I already have some ideas for my new DIY light setup, which will be taller and have some additional LEDs. That way I may be able to overwinter even some of my adult size plants way better than before. 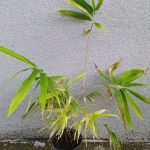