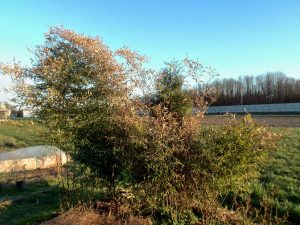 Winter damage from the northern side

After unusually dry winter with almost no snow cover and two months of uninterrupted below freezing temperatures, spring came early. Due to lack of snow cover, soil got frozen down to 50 cm deep. That made me think that Bamboo shooting season will be postponed for quite some time. Fargesia Rufa started late and I believed my Phyllostachys bamboos will also need a bit longer to finally wake up. Moso proved me wrong. 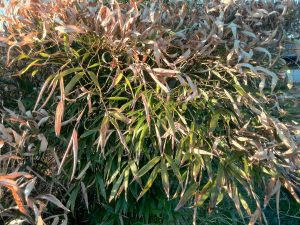 Top layer of leaves got burnt, leaves below remained protected

Winter did some damage to the Phyllostachys pubescens ‘Moso’ seedling this year. Not as much as I would have expected, though. Despite being frozen solid, most of the canes survived with moderate leaf loss. North facing side survived almost completely undamaged while southern, more exposed side took quite some damage. Older, smaller culms got defoliated completely this year, which was a surprise to me, because I expected the older and completely hardened culms will have much better chances, compared to young and tall culms. Youngest culms from previous spring were not damaged until the worst cold hit us. Low temperatures around -15°C, sunny and windy weather with soil being completely frozen, managed to burn some of the leaves. I can only guess how they would look like if the soil would remain thawed. 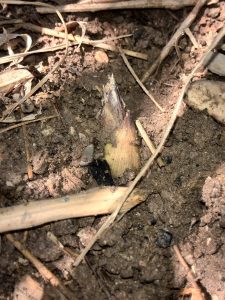 First Moso shoot of the year

To my surprise, I have found first Moso shoots on March 25th. That is the earliest Moso shooting date (well actually it’s a tie with season 2014) so far. Until this season, the first to poke out of the soil were always very small shoots that grew on the edges of the grove where I severed the rhizomes. Not this year. The first shoot I saw is already larger than shoots from last year. I accidentally exposed it when I decided to water the bamboo. When I looked a bit closer, I noticed more a bit smaller shoots on the western side of bamboo clump.

Three weeks of warm and sunny weather warmed up the soil and grass started actively growing. It didn’t take long for the first fruit trees to wake up as well. On the very same day when I noticed Moso shoots, apricots opened their flowers. Everything  re-started in fast forward mode this year. 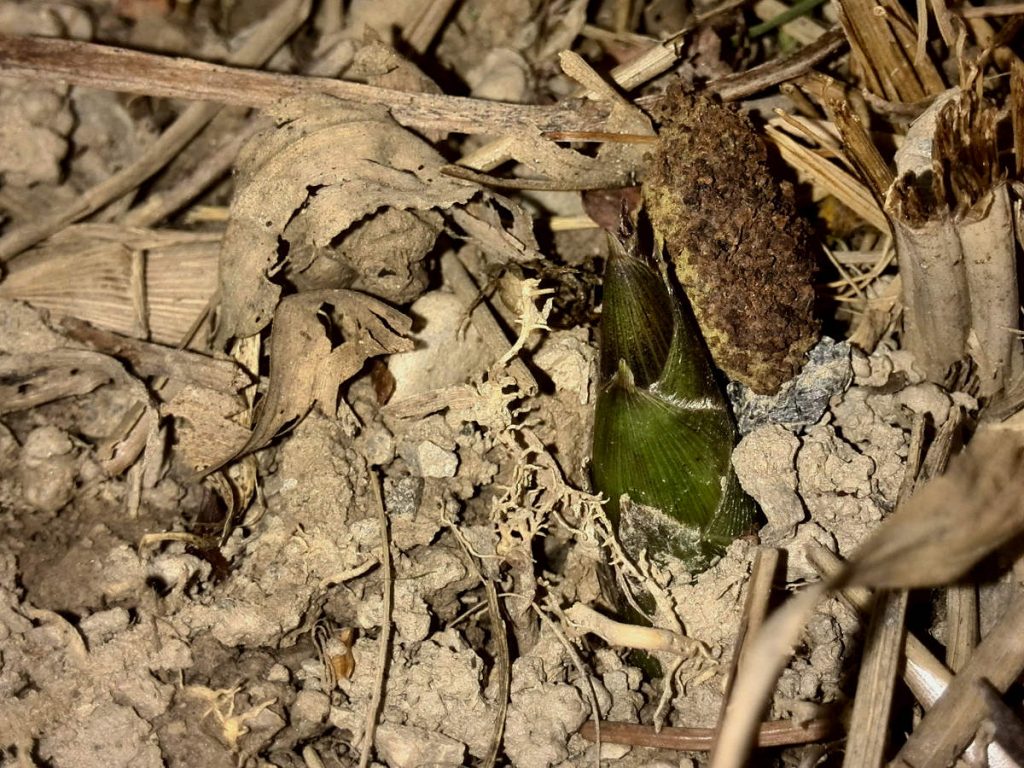 I have not noticed the second shoot until I checked the snapped photo. 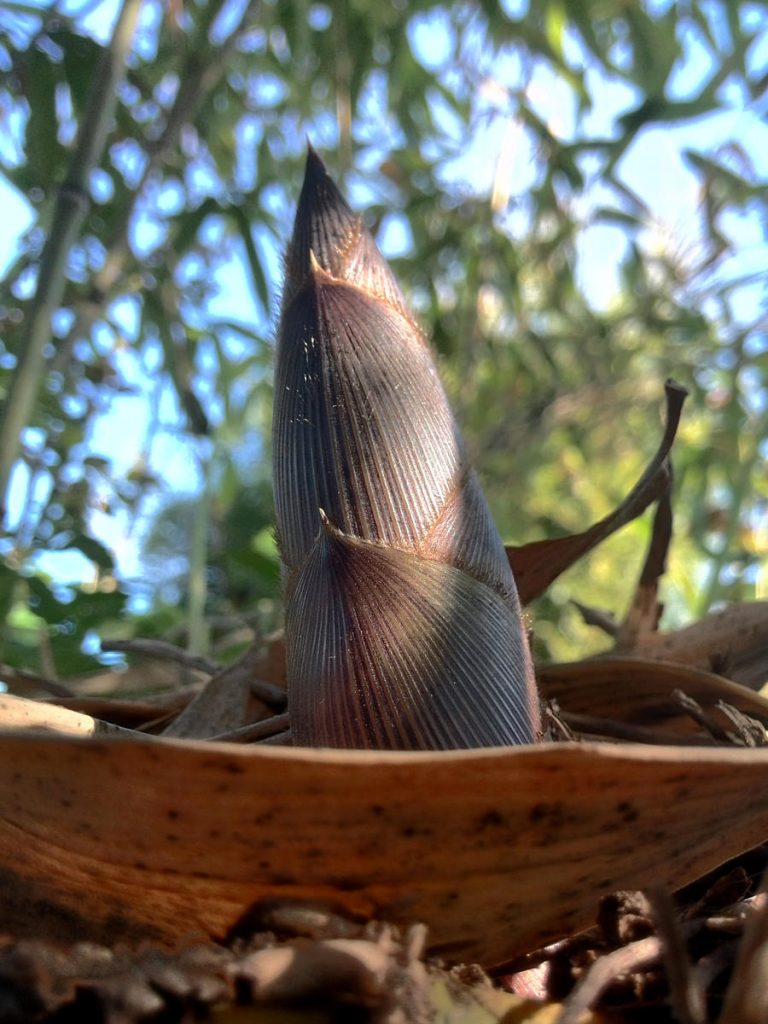 At first it didn’t look like there will be any upsize. Shoots were not as large and seemed more juvenile compared to the larger shoots last season. Eventually, they started getting thicker and started showing Moso specific features. It seems that last year, shoots started from deeper down in the soil, because I have added some soil and mulch around the bamboo during the previous year.
As the shoots started growing, it became evident, that there was some upsize, compared to last season. Like last year, there were many small(er) shoots that arrived earlier. I have left all the shoots intact, like in previous years. Smaller shoots can always be pruned off later on during the season, if the grove becomes congested. 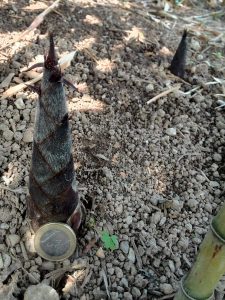 Shoots have increased quite a bit this year 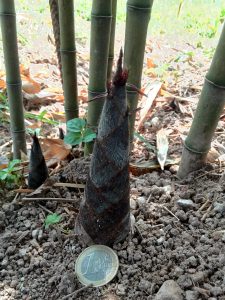 To compare the size of the shoots, I use 1 Euro coin 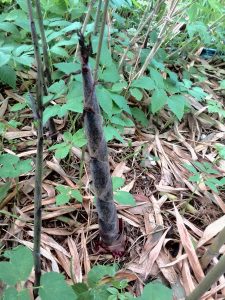 The upsize in some parts of the clump was impressive

In late April, temperature plunged down to -5°C a couple of nights. Late freeze did a lot of damage to most of the fruit trees and completely defoliated walnut trees. We’ve had late freeze like this for two year in a row now – this year it got even worse than last year. The freeze, however, did no damage to the bamboo shoots. They were quite tall already at the time and for a while, I got really worried.
After the cold weather, we’ve had some warm rainy days again. Abundance of rain and mild weather (temperatures around 10°C) made the shoots grow much faster again. At that point it became evident that the number of shoots increased this year. Large shoots emerged throughout the whole grove, not just on the eastern side like in previous season. Majority of the large shoots, though, is still facing East. 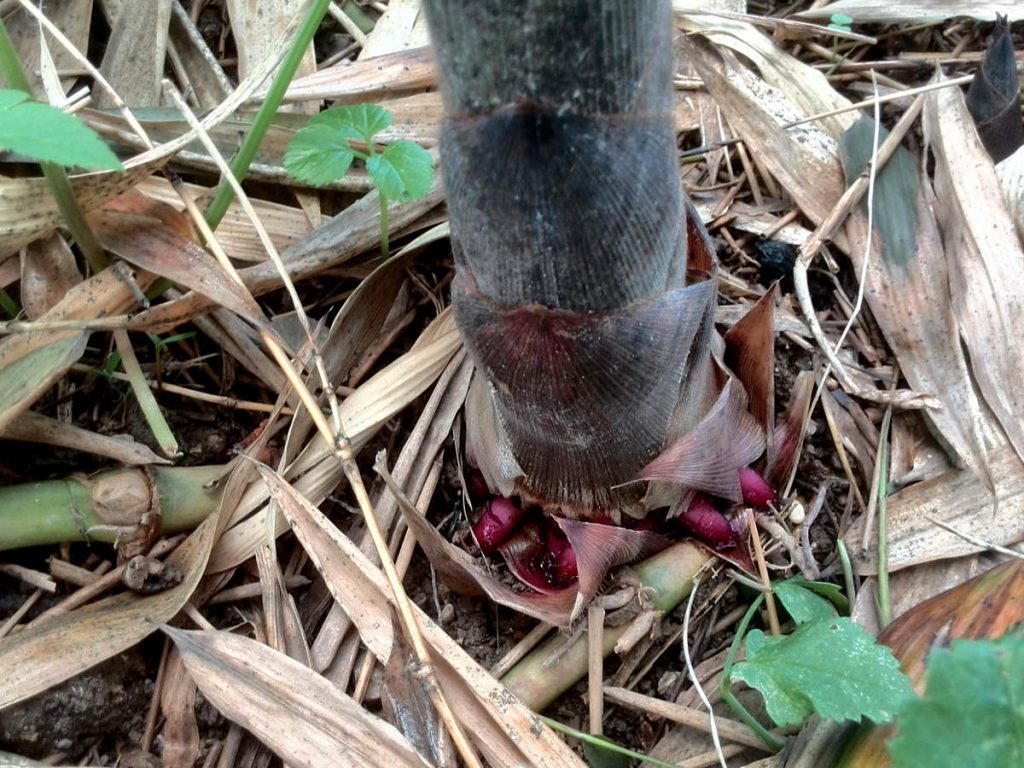 I will update this post regularly until the shoots completely leaf out.