Each spring or early summer, bamboos start shooting. It’s favourite time of the year for most of Bamboo growers, that anticipate the new season with curiosity.

Many bamboo varieties  look similar if not almost identical when they are mature, but most of them, if not all, have unique shoots. To successfully identify a bamboo, we usually depend on unique characteristics – mature shoot appearance offers just that.

I’m growing several different bamboos and I decided to take shoot photos and try to capture their uniqueness.

Borinda fungosa is the first bamboo I owned. I had grown it from seed in 2011.

Shoots are a bit different from other bamboos, because of extremely large culm sheaths of Borinda genus. As they emerge, they seem completely hollow. After a while, they start to look more like other bamboos, when stem starts elongating and fills the empty space inside the shoot.

Borinda is a late shooter, it usually shoots around mid May. It usually (always so far) sets another round of shoots around September which get killed during the winter.

Hibanobambusa tranquillans ‘Shiroshima’ is thought to be a natural hybrid between Phyllostachys nigra ‘Henonis’ and Sasa veitchii. It’s variegation and large leaves make it look spectacular.

Shoots often appear completely pink or white and then, after they get exposed to light, turn into light green, with cream white stripes and pink tanned sheath blades.

Dense hair on the shoot offer good protection from pest that wakes up early in the spring, like slugs for example. 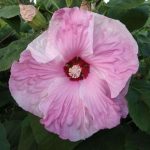