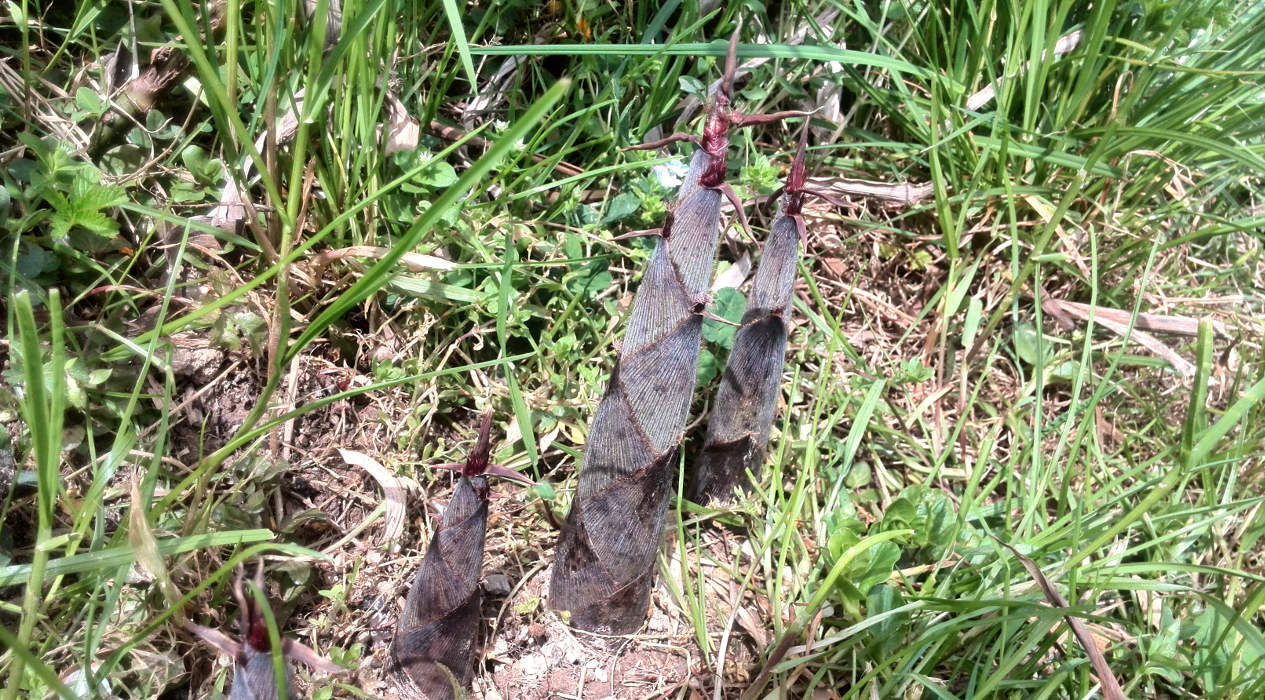 I tried planting bamboo seeds in 2011 and failed miserably with old Phyllostachys pubescens Moso seeds. I’ve tried 100 seeds and couldn’t get one single seedling to sprout. Second batch of seeds was supposed to be fresh and much more viable. I was able to get several seedlings to grow slowly from tiny little plant to not so tiny bamboo seedlings. I’ve learned Moso bamboo is hard to keep happy. I’ve been slowly learning about bamboos on my onwn mistakes and growing them in containers was a nightmare. In the end I’ve ended up with 2 living seedling, one is declining and is now hardly any larger than one year old seedling, but the second one managed to survive all the torture and eventually escaped the pot in its second year. It started growing in tight space where I left it, knowing that some day, it might become too large and I’ll have to remove it. That day seems to be getting close.

A year later I’ve bought Phyllostachys aureosulcata rhizome division, and learned how much faster they grow, compared to tiny little seedlings. Well, all that was true until this year (Well, Spectabilis should also upsize considerably this year – can’t wait)! The tiny little Moso seedling finally took off after completely covering the area with thick rhizomes.
Last year I’ve been a bit disappointed in the spring, when it only managed to put out around 10 shoots which did upsize, but not as nearly as much as I had expected. Largest rhizomes were around the diameter of the largest shoots, but… rhizomes were everywhere and upsized shoots only grew in a tight clump on south-eastern position of the bamboo.

The last summer and autumn, seedling further increased rhizome growth! Some of the rhizomes that were ‘dolphining’ around the clump were a bit over 1cm diameter, which is larger than last year’s shoots. I expected upsize. And I expected more shoots than last season.
I haven’t been fertilizing the beast much, except for the bucket of wood ash or two over the winter and a thick layer of mulch in the fall, which I removed when warm weather came with first signs of spring. I noticed first shoots quite early, compared to previous years, so I wasn’t really aware, what to expect regarding the shoot size. After the first real rain, the shoots instantly took off.

The winter this year was quite warm, and the bamboo didn’t suffer almost complete defoliation like it did a year before. Like usually, first shoots that appeared were the smaller shoots of the shooting season. They appeared a week or to before the large shoots started to appear. And when they finally did, I knew why I like this time of the year so much. 🙂

Like in previous years, white variegation of the shoots returned and with this seedling’s first more mature shoots, variegation started to show completely different effect. On juvenile shoots, variegation was nothing more than white striped leaves, sometimes even with a hint of purple. Variegation seemed fabulous, but then I’ve seen how mature shoots look like! On mature shoots, there is much more purple and red pigment, which brings out beautiful bright orange coloration. I’ve taken two shots, one in bright sunny condition and one in low light overcast weather – shoots look great in both cases, but the light emphasizes the bright color even more. Like previously, the variegation builds up with each additional node. At the beginning they start without variegation and the shoots look like regular Moso shoots.

This year, the diameter of the shoots increased considerably. There are still a lot of juvenile shoots, especially after some late snow related damage, but the majority of the shoots only started to show mature form. It will be interesting to see how the shoots look like in a couple of years, when they receive even more features of an adult plant. The pattern of spots and speckles on the culm sheath also became evident this year. Shooting season is not even over yet and I can’t wait to see the next one. 🙂

Despite relatively cold winter, B. fungosa came out only slightly damaged and fully recovered in early spring. Even bamboos with more damage started shooting before fungosa, so I actually started to be a bit worried about it’s spring shooting. If it would decide to skip it and only start shooting in the fall, all the new growth would likely be lost during the following winter. It had grown a lot of new branches and leafed out really soon after winter, so I expected it to shoot soon as well. That did not happen, it took it’s time.

When in the mid June first shoots started to appear, temperatures were already summer-like, and it usually refused to like that kind of weather, especially in it’s new location, that is much more exposed to full sun than it’s previous growing place. Shoots appeared small at first, but soon started to get thicker and thicker, showing some decent upsize from last year. I watered it regularly to prevent it from drying out during heat waves, we’ve seen this year, and surprisingly, bamboo actually liked the amount of sun. Before, when it was smaller and younger, it became chlorotic and pale after even short exposure to heat and sun.

Shoots grew through the dense clump. Shoots have soft growing tip, which is completely different than with most other bamboos. It can easily look like the tip is broken, but it’s just the soft culm sheath that can easily move through the obstacles and make space for the shoot to finally tower itself above old growth. When it began shooting, I expected it to stop after first batch of shoots, so they can mature and leaf out like bamboos usually do. Not Borinda fungosa – it shoots constantly through the early and mid summer, later with smaller (but not small) shoots. First wave of shoots is numerous, then they start appearing in lower numbers with more time between emerging new shoots.

When compared to phyllostachys, Borinda needs quite a bit more time for the shoots to mature. Hopefully, all the new culms will harden enough to withstand the next winter. Bamboo is getting more hardy to both, winter cold and summer heat. It used to suffer during both, summer and winter and only really thrived during spring and fall.