Not a typical year This year started normally, first shoots appeared in March as they always do. Then strange things started to happen. One of the seedlings (the most variegated one) stopped and refused to shoot until late May or early June, and even then, it only managed to produce a couple of thin shoots. […]

Early starters Like each year since I’m growing the seedlings in their outdoor location, they started shooting before other bamboos. Fargesia Rufa started a week later and Phyllostachys pubescens ‘Moso’ seedling woke up 2 weeks after the seedlings. Winter was mild and bamboos managed to get through it without much damage. Sun during the summer […]

Winter is coming Tonight, we’ve seen snowflakes in the air for the first time this autumn. Before the arrival of winter and bitter below freezing temperatures, bamboos prepare and become hardier which makes them more likely to get through the winter unharmed. With first cold, all Phyllostachys bamboos started shedding some of their leaves to […]

Scorching sun Shooting season is over and all the new shoots are now fully grown and branched out. At first, there was no issues related to direct sun exposure. I suspect the problem started when the sun position got high enough and its strength became harmful for delicate plants. I observed first signs of leaf […] 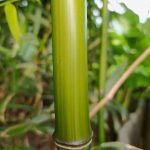